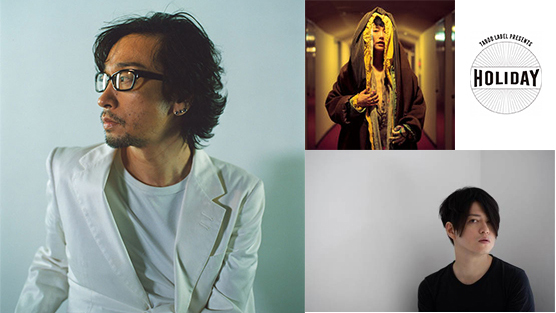 “HOLIDAY” is a triple-bill live party organized by Naruyoshi Kikuchi as a showcase of “TABOO” label produced by himself. It will be the 3th time. This time, The main act is a performance by Alternative Latin Orquesta “Naruyoshi Kikuchi and Pepe Tormento Azucarar”. It’s first time to perform in low-price event.

The front act is a unplugged set by Rinbjo（A・K・A Rinko Kikuchi）. She came back from maternity leave after releasing “Genkairei” and start to perform again. And “Kyakujin（guest from out of the label）” is Keiichiro Shibuya, perform his piano solo. This event will be a full-acoustic party by them succeed in the world.

The co-acting with Keiichiro Shibuya has been a while since “Keiichiro Shibuya Playing Piano Plus” produced by Shibuya himself in Warehouse Terrada at the end of 2016. They had a great harmony perfectly in tune with each other Even though it was almost improvised performance. And this time, we can see a unplugged performance by sax and piano.