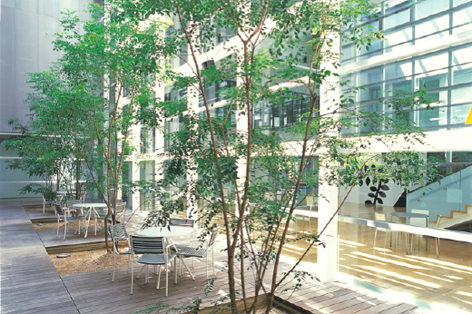 Keiichiro Shibuya + evala
Keiichiro Shibuya and evala are two of the driving forces behind ATAK, a label that has been attracting attention around the world with releases of elaborately produced experimental music.
Having initiated the “third term music” project with Takashi Ikegami, a scholar in the field of complex systems science and professor at Tokyo University, they keep operating on the cutting edge of computer music. In 2006, they unveiled “filmachine”, a three-dimensional sound installation created in-residence at YCAM. This piece was awarded an Honorary mention in the Digital Music section at Ars Electronica, and subsequently exhibited in Berlin. A worldwide tour of the “ATAK NIGHT4” live music event in 2009 helped solidify the artists’ international reputation, and expand the range of their influence.
The new work that is unveiled at YCAM this time marks for both artists the first occasion to build a sound installation out of piano sounds, and focus on sound (through a 5.1 channel speaker system) alone without adding visuals.

Concept:
A sound space filled with processed, decomposed and reconfigured piano sounds
This sound installation piece is based on data taken from the latest piano solo album “ATAK015 for maria”, composed and performed by musician Keiichiro Shibuya. Sound data of all pieces included in the CD were repeatedly processed, decomposed and reconfigured with a computer program, introducing new layers in order to redefine the relationships between the single tracks, and ultimately create a body of sound that is completely different from the CD’s contents. Two versions of the work are installed in two of the YCAM’s Patios, known for their unique “wall of sound” effect, using 5.1/5.1+2 channel speakers with a distinctive sound embedded in the floor.
In response to the Patios’ different architecture and spatial acoustics, the respective installations work with differently programmed sound. The programming by Shibuya himself together with sound artist evala was designed to create a sense of three-dimensional movement within a constantly transforming sound space and shifting sonic layers.

Fragments of a high-quality DSD recording (128 times higher resolution compared to a conventional CD) of Shibuya’s piano performance were processed, decomposed and layered with a special computer program, with the aim to establish a sonic environment in which sound seems to be traveling three-dimensionally. As the resolution of the original sound recording is on a totally different level from commonly used field recording or computer music data, the work was artfully conceived as an endless process of continuous transformation of sound that pervades the space as organically as smoke. Employing computer programs to fully explore the possibilities of spatial expansion, the sound processing is so complex and diverse that it is hard to believe that it is all based on the same data, presenting the visitor with music and sound that seems absolutely new. Listening to the sound as it moves around inside the Patios gives the visitor an acoustic experience of a soundscape that is perfectly unique to this exhibition.