Concept:
Why water becomes turbulent? Once a Russian physicist Landau thought that a fluid system becomes turbulent after having the infinite number of Hopf bifurcation (limit cycle). This is a nice and simple idea but sometimes nature is much more interesting than this. In 1971, two mathematicians Ruelle and Takens proved that a three unrelated frequencies is enough to cause turbulence. The system here is believed as a good example of their theory.Water is put in the gap between two concentric rotating cylinders.When an inner cylinder rotates, a stable stripe pattern (Couette flow)with a rolling vortex pattern in the circumference direction (Taylor vortex) emerges.By rotating the inner cylinder faster, we observe the transition from the stable pattern to disordered one, called a turbulent flow.

A CCD camera is set to extract signals from the fluid pattern by adding the metal particles to reflect the incident light. We make visual and sound effects in real time. Also the HDVideo is continually taking crane shot of the entire system, mixing with the recorded sceens to display motion structures with different spatial scales. Music is composed basically with Fourier’s concept such as combining sin waves. Computer music in particular has such characteristics. The third term music we propose is a new way of making music based on patterns and dynamics without reducing down to sin waves. This apparatus is the metaphor of the third music and at the same time a machine that generates sounds out of motion dynamics. The apparatus was made by Prof. Shigeo Imao at Gifu University. We appreciate him for the kind cooperation. 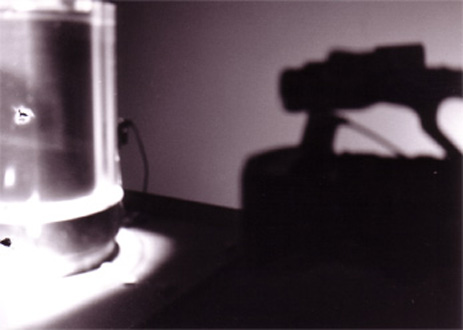 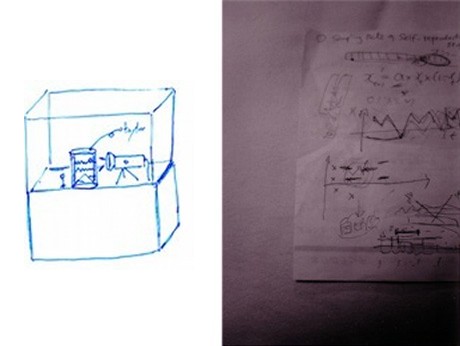