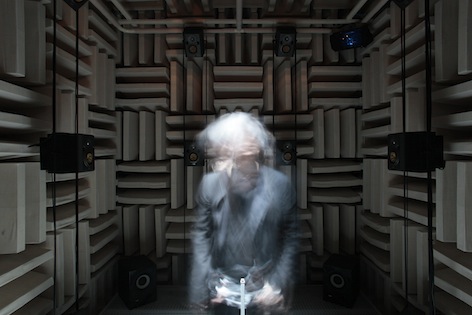 Born in 1973, SHIBUYA Keiichiro is a musician/composer. He graduated from the Faculty of Music, Tokyo National University of Fine Arts and Music, and in 2002 established ATAK. In 2005 he began developing “The Third Term Music,” which incorporates nonlinear physics, in collaboration with complex systems researcher IKEGAMI Takashi. As a result of this collaboration, in 2006 they presented the three-dimensional audio sound installation “filmachine” at YCAM. In 2010, he created the soundtrack for the ARAKAWA Shusaku documentary “Children Who Won’t Die.”

Born in 1976, evala is a sound artist. He established “port” in 2004. He has been involved in numerous projects–including the presentation and performance of radical electronic musical works, sound designs for various media and actual spaces, and interactive programs incorporating the latest technologies–and while centered on music, his activities encompass a broad array of fields.
http://port-label.jp/ http://evala.jp/

Concept:
A 24.4 channel sound system installed in an anechoic room, a special space that absorbs sound echoes (comprising 24 speakers arranged in 3 levels of 8 speakers each and subwoofers installed in the 4 corners of the room), completely controlled by a computer program, creates a space with sound and light in addition to the high-speed flickering of strobe lights.

This work is a continuation of a piece entitled “for maria installation version” that was presented in 2009 at the Yamaguchi Center for Arts and Media (YCAM). In this completely sealed space, it is possible to experience three-dimensional audio produced by not only horizontal but also vertical movement of sound. The sound material is sound data of piano solos performed by SHIBUYA from the CD “ATAK015 for maria” (2009) recorded with great sophistication using DSD (Direct Stream Digital) Recording, whose resolution is 128 times greater than that of a CD. From this data the piano keystroke sections were completely cut, extracting only the echo components, which then underwent processing and programming.
Because there are almost no echoes in an anechoic room, it is possible to manipulate sound movements with even greater sophistication. 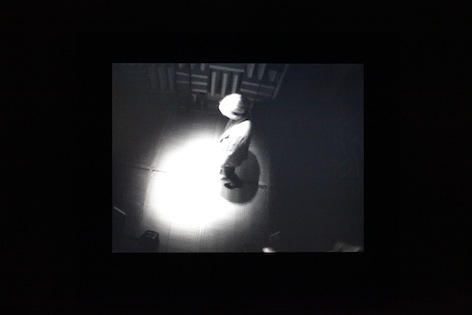 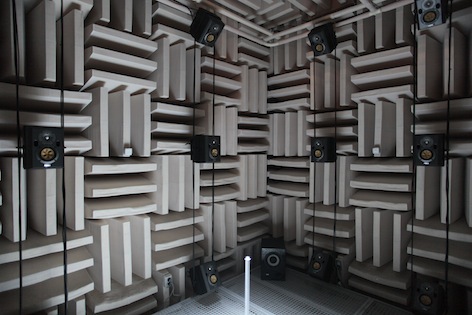