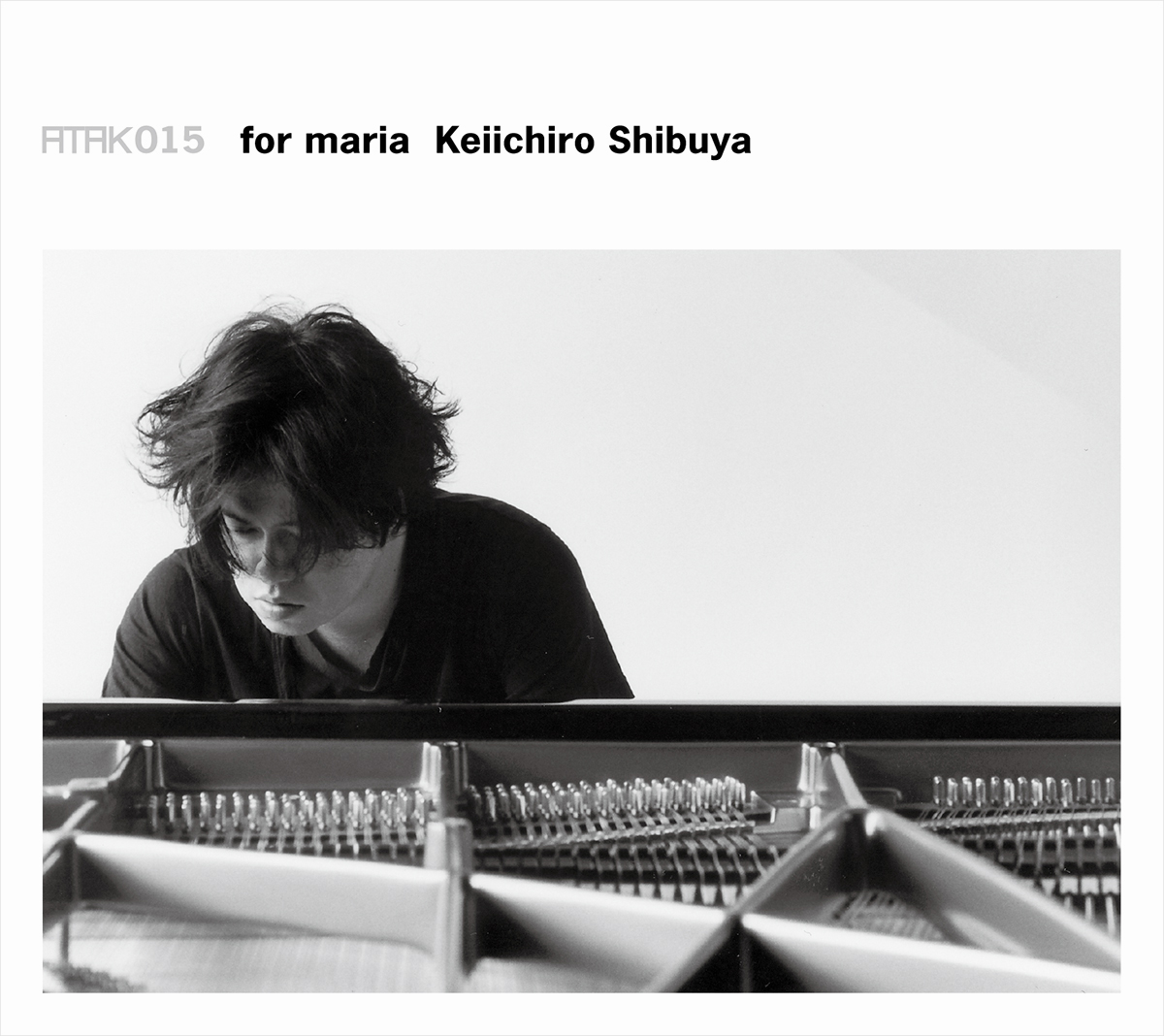 Since Keiichiro Shibuya established the music label ‘ATAK’ in 2002, he has been a musician who has consistently very critically explored the relation between technology/science and music.

His first album ‘ATAK000 Keiichiro Shibuya,’ released in 2004, had a drastically and precisely composed fertile sound and was admired as “a perfect work that rules over the history of electronic music.” His second album ‘ATAK010 filmachine’ was a world first 3-dimensional sound CD for headphones and was much talked about.

‘ATAK015 for maria Keiichiro Shibuya,’ his first full album in 2 years since ‘ATAK010 filmachine,’ is entirely different from his previous works, because it is a completely acoustic album of his own compositions and piano solo performances. This change reflects a big change in his own experience.

For several years, Shibuya actively developed sound art and digital music by applying non-linear science, co-researched with Takashi Ikegami (Complex Systems researcher/professor at the University of Tokyo). They have profoundly explored “complexity” in music, making full use of computer technology and its diversity.

As a fruit of their work, ‘filmachine,’ a sound installation composition exhibited in Yamaguchi Center for Arts and Media (YCAM) and transmediale in Berlin, was awarded honorary mention in the digital category at Ars Electronica in 2007. At the same time, he gave a lot of concerts in Europe and has consistently attracted world attention in the field.

It can be said that it is because he has dived into such ‘complexity’ and ‘fertility’ produced by the hybrid of music and science that Shibuya completed this piano solo work. In this album, making the most of piano as a medium and its qualities, he has explored new possibilities and succeeded in realizing a similar ‘transcendence over reality’ that he has aimed for in his digital music.

So far, Shibuya has conducted experiments and studies in ‘computer’ music about how ‘complexity,’ which cannot be achieved intentionally or conceptually, appears when interventions of humans or nature make parameters increase. However, Shibuya says that the reason why he chose ‘piano’ and ‘piano solo’, a medium in which he composes and performs by himself, is that he discovered new possibilities of piano by mastering computer music.

“When I gave a piano concert last year, I noticed that subtle differences in pedaling or nuances in touching the keys can make many various tones, even in the same chords of C, E and G. I’ve played the piano for about 30 years, but I thought it was now possible to approach the piano rather in a very interesting relationship of influences as a completely different instrument rather than merely mixing piano and computer sounds.’ (honeyee,com “Next Stage of ATAK” 4.22)

Therefore, Shibuya drastically focused on realizing both high precision in composition despite simplicity of structure and that of sound.

As a result, a perfect and epoch-making piano album was completed. Although such an album as this has not been heard by listeners of digital music or a great variety of music, it is universally enjoyable.

Through a series of processes of recording, mixing and mastering, Shibuya thoroughly devoted himself to making a piano solo album with a sound resolution like never before. He felt separating these processes as is common in present CD production was a problem, and therefore chose his good friend Seigen Ono (of Saidera Matering) rather than as the album’s engineer, as a collaborator and fully involved partner.

For recording, Shibuya used a concert hall with a Bösendorfer’s ‘imperial’ piano and DSD (direct streaming digital) recording environment, delicately setting only two microphones for main and ambience to catch creaks of piano strings or the sound of touch. DSD recording environment makes recording in extremely high resolution on the SACD’s (super audio CD) standard possible, and the recorded piano sounds were edited, mixed and mastered by DSD environment, SONOMA. Consequently, when played in CD device, the piano sounds as fresh as if Shibuya is playing the piano right there.

The musical pieces containing melody and chord, which he never used in computer music, are marvelously simple and beautiful, and wake minute and rich emotions. About the concept of ‘Saudade’ in Brazilian music, Shibuya says, “The marginal feelings that I can’t live without this emotion or I’ll rot away without this romanticism, blend with rhythm, chord and melody, and bear a ripe fruit. I can understand such feelings now.” It can be also said that this big change comes from Shibuya’s own experience while grieving over the loss of his both official and private close partner Maria last year.

The desire to make a CD that “sounds as if somebody is playing the piano nearby” also derives from not a mere concept or technical problem but his experience that music relieves him in his loneliness. This album’s title ‘for maria’ simultaneously indicates its dedication to Shibuya’s late wife Maria and alludes to Arvo Pärt’s album’s “für alina,” which he repeatedly listened to in his loss. However, Shibuya did not know the existence of “für alina” when he finished composing and chose the title for the album’s first tune ‘for maria.’

In taking further steps to create new music, “für alina” became the spiritual lead for him. He says that there are a lot of such contingencies. ‘for maria’ was composed on September 11, precisely one year before this album’s sale. This date is maria’s birthday. But later, he found that it was also Pärt’s birthday. Through such various contingencies, miracles and experiences. This album was completed in one year. Shibuya himself says, “I know no other piano CD with such a good sound. It contains all the sounds that I want to listen to now.” The profundity of the music is immeasurable.

Keiichiro Shibuya
Shibuya graduated with a degree in composition from Tokyo National University of Fine Arts and Music. A musician who has been active all over the world making full use of science technology and developed cutting-edge in the field of digital music, in 2002, he established ATAK, which functions not only as a music label but also embraces creators in various fields such as design, network technology, visual technology and so on, as well as being a kind of “platform” to develop dynamic new work. In 2004, he released his first solo album ATAK000 keiichiro shibuya. His dense composition, in which he drastically focuses on sound material (color) and rhythm, was described as “a perfect work that rules over the history of electronic music.” In 2005, Shibuya and Takashi Ikegami (complex system researcher/professor at Tokyo University) started developing The Third Term Music based on nonlinear sciences. As a fruit of their work, they exhibited ‘filmachine’, a sound installation composition, in 2006 and its CD version ‘ATAK010 filmachine,’ a world first 3-dimensional sound CD for headphones, in 2007. Because of these works, they were awarded honorary mention in the digital division at Ars Electronica in 2007. In 2008, the installation was shown at the transmediale, the biggest annual festival of art and digital culture in Berlin, and he gave a concert there. He also worked for a pedestrian crossing signal music project as an electro-acoustic specialist as well as working as a musician for International Association of Traffic and Safety Sciences. In 2009, he organized and took part in an ATAK NIGHT4 tour throughout Europe, Asia and Japan. He worked as an associate professor at the University of Tokyo in 2006 and Tokyo University of the Arts in 2007.