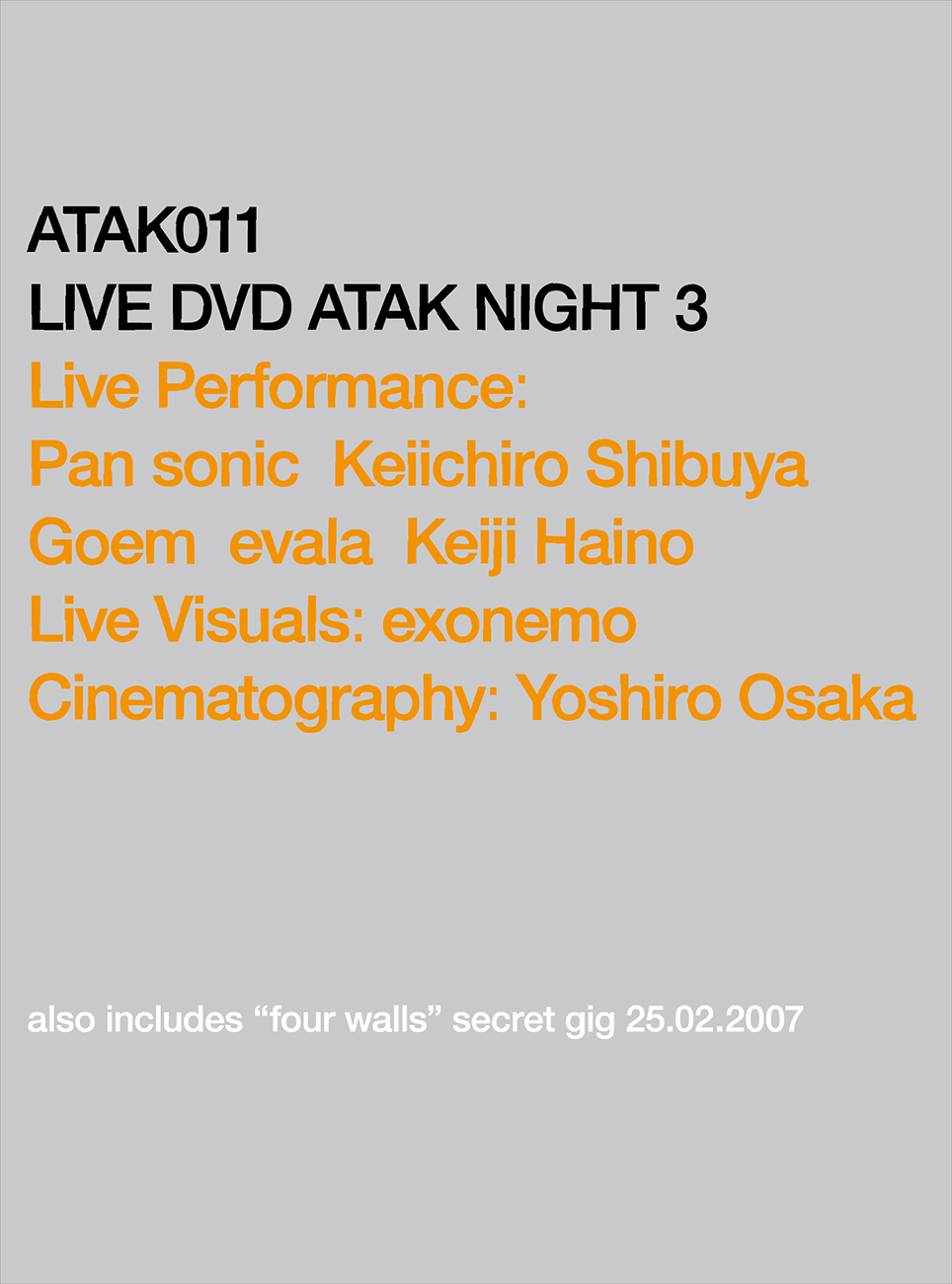 ATAK planned a concert tour, inviting Pan sonic and Goem.
The last gig, “ATAK NIGHT 3”, on 23rd February, 2007 at UNIT, Tokyo, is released as a DVD with exhaustive footage, and high, better-than CD sound quality(48kHz, 16bit).
It’s vacuum-packed excitement with 175 minutes of recording.
The danceable and devastating performance, with Shibuya’s three-dimensional sound images, made the audience in the fully-packed venue crazy.
Pan sonic showed overwhelming intensity with their powerful staging, and they performed for one hour, including encores.
Secret guest, legendary noise musician Keiji Haino came on stage with his super voice performance, there were high-quality performances of evolutionary laptop music by Goem and evala, and there is a complete recording of the whole live performance!
Additionally, the DVD comes with a documentary film edited by Keiichiro Shibuya by himself, of a secret event held on February 25 called “four walls -secret gig 25.02.2007”.
The footage includes the world premiere collaboration between Pan sonic and Keiji Haino, a solo performance of by each tour members, and a devastating performance with all members together, which gave the impression of a sound wall.

“Shibuya’s live show was really overwhelming.
It was so noisy but in utterly high resolution, so that the whole essence of the sound was thoroughly audible.
The experience was as if my auditory sense itself had been reconstructed. There is no doubt that Shibuya is now on the extreme cutting-edge in the field of electro-acoustics.”
Atsushi Sasaki (HEADZ/music critic)

“Keiichiro Shibuya doesn’t believe in the theoretical concept. He makes sounds with pleasure principle.
One thing is singular to say, that both Pan sonic and the sound he creates from cellular automata reaches his ear with the same pleasent feelings. This DVD indicates the prospects of his unique sense, more than ever before.”
Hiroki Azuma (philosopher/critic)

“Watch out, if you touch this sound you’ll get aftershock…”
Yasuhiro Mihara (designer of sosu)