10/31 (Sat) Shibuya Keiichiro, Phew, AAAMYY and others to perform at the Nakameguro Free Music Festival on Halloween

10/31 (Sat) Shibuya Keiichiro, Phew, AAAMYY and others to perform at the Nakameguro Free Music Festival on Halloween 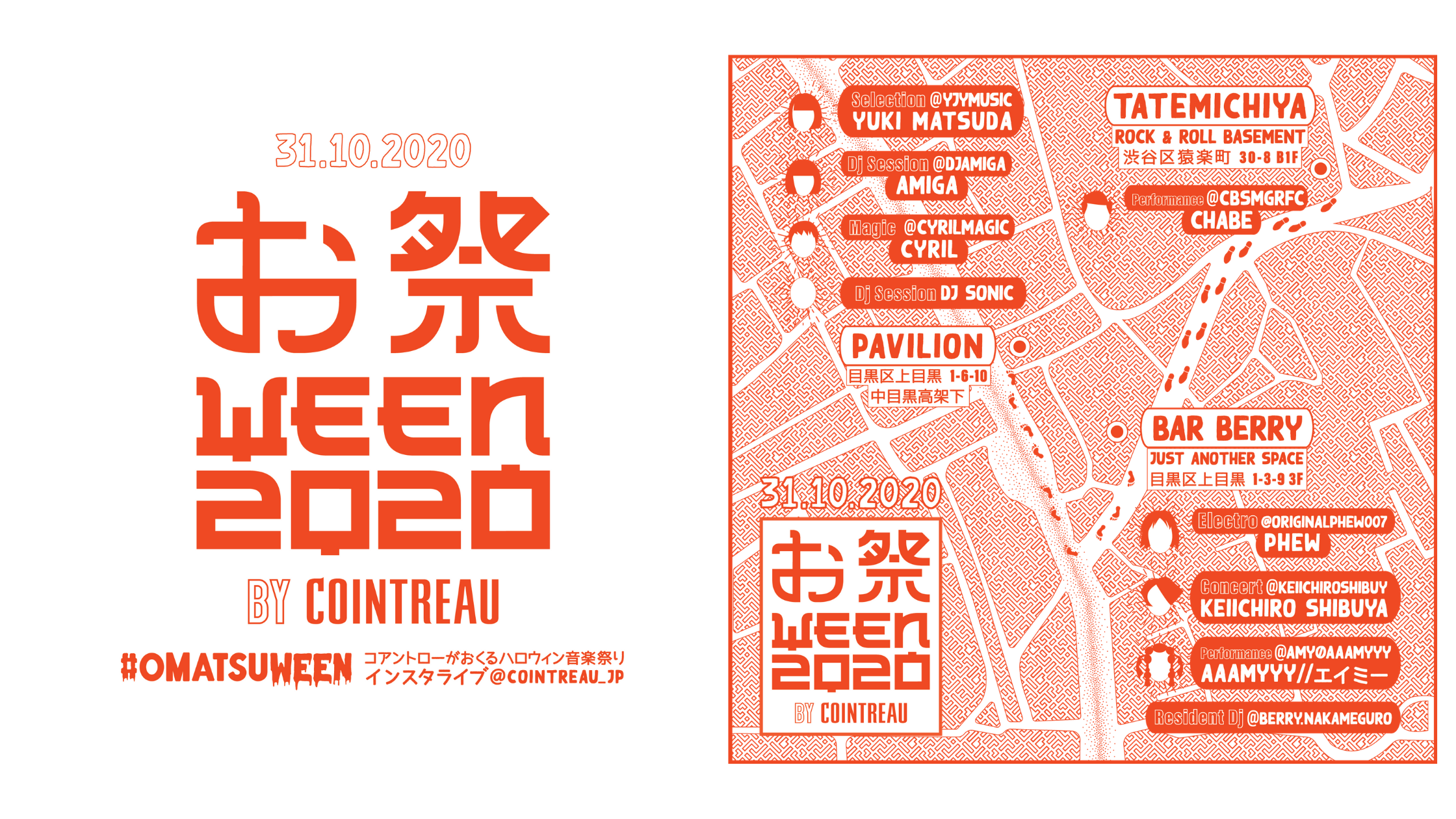 ◆Information
HP https://rcjkk.com/omatsuween
Instagram https://www.intagram.com/cointreau_jp/
Facebook  https://www.facebook.com/CointreauJP
———
On Saturday October 31st, 2020, Rémy Cointreau Japan will hold a Halloween event called “Omatsu Ween” at three locations in the Nakameguro area.
Gorgeous and unique artists such as Keiichiro Shibuya, Phew and AAAMYY will participate in the event, and all events will be free of charge.
Nakameguro is one of Tokyo’s most popular cultural destinations, and many international artists cite it as one of their favorite areas.
The three most popular shops in Nakameguro are Berry (1-3-9 Kamimeguro, Meguro-ku, Tokyo), Tatemichiya (30-8 B 1F Sarugakucho, Shibuya-ku, Tokyo), and Pavilion (1-6-10 Kamimeguro, Meguro-ku, Tokyo), all of which are international, yet very different.

Each venue will take measures against infectious diseases, such as temperature checks for visitors and disinfection before entering the stores, as well as thorough ventilation and restrictions on the number of people inside the venues, with the aim of holding the event in a new way of life.
On the day of the event, the venues will open in stages from 6pm, with concerts, DJ sessions and magic shows taking place at each venue according to a timetable. The main venue for the live performances, Berry, located in an abandoned building, will open at 8pm, with live music starting at 10pm.

First up was a live voice and electronics performance by Phew, who recently released his new album Vertigo KO on Disciples, a sub-label of UK record label Warp Records. Shibuya Keiichiro, whose latest album, ATAK024 Midnight Swan, has been garnering a lot of attention, followed, performing a piano solo in complete darkness. The two will also perform together when Phew switches to Shibuya Keiichiro, which is not to be missed. Finally, AAAMYY, a member of the popular rock band “Tempalay” and also active as a soloist, will perform as a trio.

In addition, Yuhi Matsuda’s music selection and DJ sets by DJ AMIGA, DJ SONIC, etc. will be performed at PAVILION, and Matsuda “CHABE” Takeji’s live performance will also be performed at Rididgeway House.

The event will be streamed on Insta Live on the SNS Instagram.