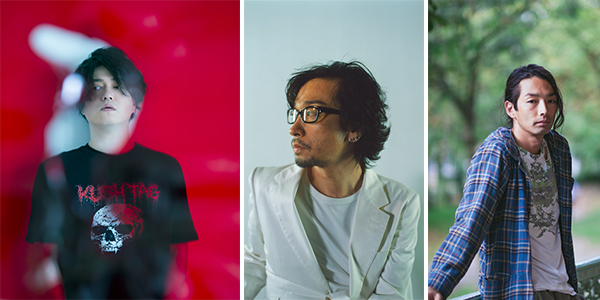 The pianist Keiichiro Shibuya will perform the annual solo piano concert in the end of the year, featuring guests artists Naruyoshi kikuchi and Mirai Moriyama.

On December 4,2016, the annual year-end solo piano concert will be held in Tokyo at Warehouse TERRADA in Tennozu Isle. It’s called the “Keiichiro Shibuya Playing Piano Plus”.

Tickets are on sale now by ［Peatix］Keiichiro Shibuya Playing Piano Plus.

Main part of the concert is Shibuya’s piano accompanied with computer sounds. This event takes place twice: matinee and Soiree, with totally different guests and music.

The matinee session starts from 16:00. It will feature a full-length piano-sax duo performed by Keiichiro Shibuya and Naruyoshi kikuchi.

The soiree session starts from 19:30. It will feature a dance performance executed by Mirai Moriyama and accompanied by piano & computer, Keiichiro Shibuya.

In addition, Shibuya will present some of his new works and also will play in solo.

The matinee’s guest Naruyoshi kikuchi has collaborated with Shibuya as a lyric writer for “Sacrifice (2012)”, featuring Rina Ota as vocalist. this event is first session as live performance.
Shibuya and Kikuchi will play not only improvisation but also standard songs including Bill Evans, Antonio Carlos Jobim and David Bowie by piano and sax.

Mirai Moriyama, the guest of the soiree, is a high profile actor and a dancer. He participated on the remarkable stage-work “VESSEL” by Kohei Nawa and Damien Jarre. Although the film “FISH on LAND” starring Moriyama which Shibuya was in charge as the music director, this duo session is first collaboration for live performance. It must be thrilling that Shibuya will play some piano pieces including his masterpiece “for maria” where Moriyama will perform on them.
Shibuya will move to Europe just after this event and will perform in Milan, Italy.

Admission on the day of first-come-first-served basis, all seated.

ticket：1 day through ticket pre-release 10,000 yen (excluding tax) , Each time 6000 yen (excluding tax, 11/14 (Mon) Release start)
※If tickets through one day of all seats sold out, but does not release each time ticket.
※Peatix only
Audiences who have 1 day tickets will be available to stay whole day at this venue. This event will provide drinking and food venders there.

Keiichiro Shibuya
Born in 1973. He graduated from Tokyo University, Music Composition Arts Department. He founded the music label ATAK in 2002, to release a cutting-edge electronic music. His masterpiece in piano solo album “ATAK015 for maria”, plus the soundtrack of Mirai Moriyama starring movie “ATAK017 Sacrifice”. He was also responsible for the music of a several movies, TV drama, CM. In 2012, Hatsune Miku starring announced the world’s first video and human absence of Vocaloid Opera performed by computer sounds only: “THE END”. He also realized the cross-functional collaboration with the complex system researcher Takashi Ikegami, robot scholar Hiroshi Ishiguro, artist Hiroshi Sugimoto, the Paris Opera star Jeremy Berangar, Louis Vuitton and PIGALLE, and also with the collaboration of fashion brands such as Ermenegildo Zegna . Now Shibuya is based in Tokyo and Paris.

Naruyoshi Kikuchi
Born in 1963, musician, writer and lecturer. As a musician, he is a sax player who takes care of songwriting, arrangement, bandleader, producer-role, singer, keyboards and rap. As a writer, he is an essayist, music critic, film critic, mode critic and martial arts critic. He also performs as radio personality, DJ, and appearances on TV. He settled his own company, Bureau Kikuchi, on 2013.

Mirai Moriyama
99. Since then, he has appeared in a long list of stage productions, m one-year appointment as Cultural Ambassador by the Agency for Cultural Affairs. As Cultural Ambassador, he spent time in Israel, Belgium, and a number of other European countries, in order to work with diverse perfing arts groups. Moriyama is mhttp://www.miraimoriyama.com/

Preface to the concert

The past few years, I’ve been doing solo piano concerts. And it had became the only important habit for me and I’ve believed that it would last forever to go ahead toward next year.

However, I feel that this isolation is also strange. Most of my international projects are collaboration works and I travel around all over the world with a large-scale team like THE END.
I believed that my piano solo would be the result of self-checking and habits. But I realized that it may be unconscious resistance or expression of attitude against homogenization which goes underneath my country,.

The piano is like mirror, it doesn’t only reflect myself but also the surroundings. And sometimes light comes into that reflection.
This end of the year, rather than being on my own, but not clustered, I wanted to try to play with both strikingly individual towering artists.
Performances have quite different contents in the matinee and Soiree:
It will feature Naruyoshi Kikuchi as a guest in the matinee from 4pm and in the Soiree from 7pm, the dance of Mirai Moriyama will be performed.
Sax is co-starring the musical instrument that makes sound, on the other side, dance has not other sound than the sound rubbing the breath or the floor.
There will be also improvised part where I will play my own songs, but there may be standard, I think I want to go back and forth them seamlessly.
I hope you to experience the isolation of each of us condensed in the one space of the Terada warehouse.